Her winning entry, which depicts Niceville’s past and present, will be featured near the main entrance of Turkey Creek Park.

“I am honored to have my artwork displayed in my hometown, and I owe a special thanks to Amanda Grandy for spearheading this project,” said Erickson.

Grandy is the Mural Project Coordinator.

Erickson’s winning mural design is a graphic representation of Niceville’s history. Anchored by the name “Niceville” in bold yellow lettering, the design is surrounded by a water background with illustrations from left to right depicting a historical timeline.

Starting with the 1868 establishment of mail service to Boggy Bayou, a graphic story unfolds telling a tale of community and growth through the years.

The mural will be featured on a wall or as a graphic display. The size will be 8 feet tall by 40 feet wide.

“The intention of this mural was to show off the history of our community while continuing to add to its landscape,” said Grandy.

“Janae’s design does exactly this; the mural she created was perfection! It embodies many important historic details of Niceville and will be placed in the center of town for all to enjoy.”

The wall and mural are meant to serve as a starting point for a future walking tour where pedestrians can walk safely and comfortably on sidewalks to reach Niceville’s most popular attractions, places, and facilities, according to Grandy.

Janae Erickson has lived in Niceville since her father retired from the Air Force in 1997. She graduated from the University of Central Florida with a Bachelor of Fine Arts degree in 2010 and brought her talents home to Niceville where she works as the Art Director for Frances Roy Agency.

Erickson and her husband, David, live in Niceville are raising two sons here.

The mural design contest was launched in January 2020. 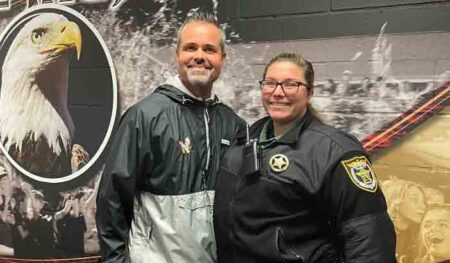