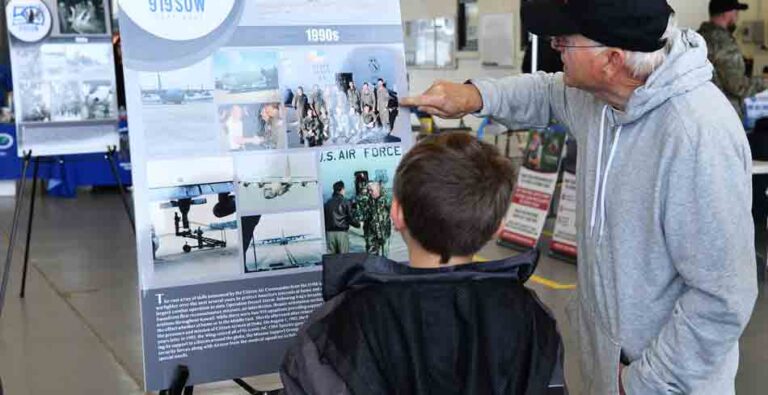 DUKE FIELD, Fla. —  The Air Force Reserve’s only special operations wing celebrated its 50th anniversary at Duke Field with events intended to honor the sacrifice of service members and their families April 1-3.

The 919th Special Operations Wing hosted a social for current and past members, a Wing Family Day, an annual awards banquet and a memorial dedication as part of its tribute to Citizen Air Commandos who have served the country with distinction for more than 50 years.

“This is our opportunity to honor anyone who has ever worn the 919t patch while serving the Nation and the families they left behind to do so,” said Col. Jason Grandy, 919th SOW commander.

“The 919th has a long and distinguished history dating back to July 1971 when the Air Force Reserve first established its presence at Duke Field. We’re here because of these heroes who came before us who have fought and defended America’s interests with valor at points around the globe.”

The Wing Family Day festivities included a petting zoo, ax throwing, face painting, a resource fair with more than 50 vendors representing helping agencies throughout the Emerald Coast and much more.

As part of the event, the unit also had seven aircraft Reservists fly in support of Air Force Special Operations Command on display to highlight the diverse nature of the mission sets currently performed by members of the 919th SOW.

“The Wing Family Day festivities showed the one-of-a-kind capability that we provide to the warfighter while also giving our members and families and chance to stay connected with each other and the local community,” said Grandy.

The spotlight continued to shine on America’s Citizen Air Commandos later that night in an awards banquet with guest speaker Retired Maj. Gen. Richard Haddad, a former 919 SOW pilot and squadron commander who flew combat missions in Afghanistan following the attacks on 9-11.

The formal dinner highlighted service members who made significant contributions to the wing’s global mission in 2021 managing to continue support for the warfighter in the midst of a global pandemic.

“While we don’t do what we do for accolades or for adulation, our members deserve this recognition,” said Grandy.

“We do this work because it’s part of who we are and our uncommon desire to be the very best.”

More than 200 members of the 919th SOW, families, alumni and community partners attended the formal dinner. Several members who were part of the Air Force Reserve when it was first established at Duke were at the banquet.

“When I came to the 919th in 1971, I made some great friends and worked with a lot of wonderful people who had tremendous talent,” said Retired Lt. Gen. James Sherrard III who was among the small group of “pioneers” who attended the awards ceremony.

Sherrard went on to experience a remarkably successful career and eventually became the commander of the Air Force Reserve in 1998.

“Our people were quite talented, and we were very proud to be part of special ops,” said Sherrard.

“The pride in our performance carried the 919th through the fantastic record the unit had when mobilized and deployed for Operation Desert Shield and Storm. It proved we had fantastic people with great talents and showed what the Reserve can do, and will do, for the country if asked.”

In addition to the Gulf War, the 919th SOW also supported Operations Just Cause, Iraqi Freedom, Enduring Freedom and Inherent Resolve, among others.

Countless Airmen from the 919th SOW earned recognition for their performance in combat making it one of the most decorated units in the Air Force Reserve.

The culminating event occurred April 3 when the unit dedicated a memorial to honor members of the 3205th Drone Group. Members of the group were part of the first unit to conduct training at Duke Field operating some of the earliest drones in the Air Force in 1946.

Local business and Chambers of Commerce throughout the area provided resources to support the milestone for the 919th SOW and its 1,700 Citizen Airmen.

“The only reason this weekend happened was because of our community partners,” said Grandy.

“We celebrated the 50th Anniversary because we have people who care about us, understand we are part of this community and want to celebrate the 919th [SOW] just as much as we do. I couldn’t be more grateful for the outpouring of support we’ve received from the community. It’s been amazing and is a testament to legacy of service that started with those early pioneers and continues with our Airmen today.”