Once bright and beautiful, the mural on the east wall of the school’s band building had deteriorated, and long lost its color and luster. Patti Gillespie, a Niceville artist and NHS parent, felt moved to do something about it.

The Niceville High School Eagle is once again flying proudly above the NHS football stadium thanks to local artist Patti Gillespie, who has restored the school’s 20-year-old eagle mural to its original form.

Once bright and beautiful, the mural on the east facing wall of the school’s band room had deteriorated, and long lost its color and luster. Gillespie, a Niceville resident and NHS parent, felt moved to do something about it.

“I wanted to give something back to our community,” she said. “The mural was fading so badly, and I am passionate about art.”

Here is the Niceville High Eagle mural pictured in May 2017 before its restoration.

The school had no funds to put toward the restoration, so with Marello’s blessing, Gillespie secured all of the needed materials at no charge from community-minded Niceville merchants. Sunbelt Rentals provided a mechanical lift, Paint-N-Color provided high-quality Benjamin Moore Paint, and Accent Signs provided signage. 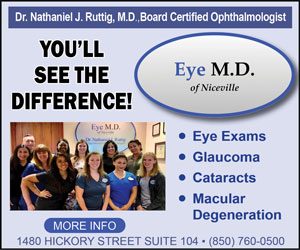 “It was her brainchild, “said Marello. “It would not have happened if she did not come to me with the idea.”

The project began with Gillespie spending many hours tracing and matching colors on the 1020-square-foot mural, which was originally donated and painted by Sockeye’s Beach and Sports. Doing so wasn’t easy: Sockeye’s is no longer in business and the former owner could not be reached, and NHS had no pictures of the mural from when it was first painted.

“I wanted to keep everything the same, not change it or add to it,” said Gillespie.

Gillespie gathered and studied what photos she could find to help her maintain the mural’s true colors and original artwork such as trees that had nearly faded completely away.

Though Gillespie said the mural originally was painted with an airbrush, she chose to repaint it by hand with a paint brush because of the windy conditions she encountered. The most difficult part of the project for her was painting while wearing a full safety harness, which restricted her movement, and keeping the lift in the proper position while she applied paint.

“I had to stay close enough to the building to paint and be safe while the lift was swaying back and forth,” she said. “Fortunately, I’m not afraid of heights.”

In all, Gillespie spent 106 hours over 15 days repainting the mural. She applied five gallons of fresh paint.

Both Marello and Gillespie were pleased to have the mural restored in time for the graduation ceremonies taking place in the football stadium on May 25. Gillespie has dedicated the restoration to her son’s graduating class, the NHS Class of 2018.