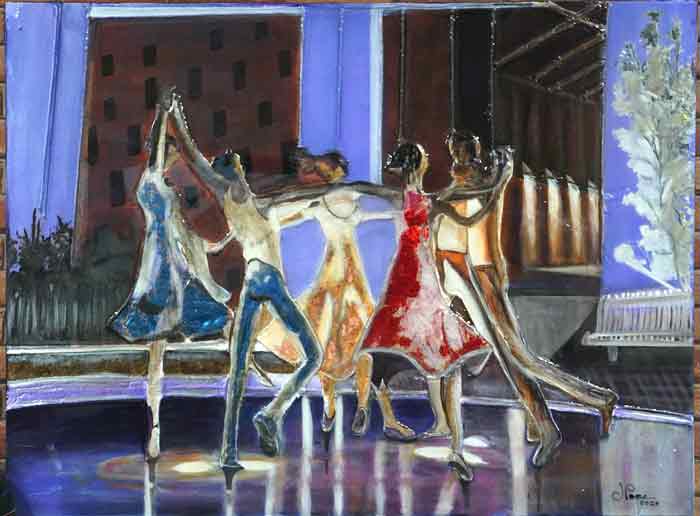 NICEVILLE, Fla. — During the lockdown months of 2020, retired pharmacist Johnny Pope of Shalimar decided to get back into his long-lost passion for painting. His inspiration? The sculpture of the seven dancers in the fountain at the Mattie Kelly Arts Center.

“We had a ballet over here and my little granddaughter was in it and she started strolling around the fountain, and I started taking pictures and I said, ‘My God, that would make a beautiful painting,’” Pope said. 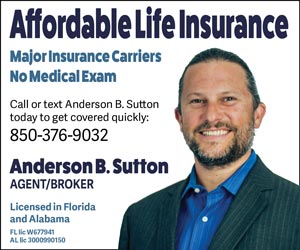 After creating an oil painting of the fountain for an art contest and immediately selling it, Pope said he was determined to make another version to donate to the Mattie Kelly Arts Center. For his second piece, Pope took a different approach and used mixed media to add some shimmer to the painting and create a more 3-D experience.

“I used grout because, instead of absorbing the color, grout allows the colors to become vivid,” he said. “Then I used gold leaf foil instead of paint for the dresses. I also used epoxy to give it the gleam on the water.”

Pope said that although it took him several months to create the piece, it was the ideal lockdown pastime as he spent hours in his garage working on the painting daily. He added that in high school he had loved art and was planning a career in it, but his parents persuaded him to take a job in a pharmacy.

Over the past 10 years since his retirement, Pope said he is making up for lost time, taking art classes here at Northwest Florida State College and exploring historical artists and techniques.

It took a year for Pope to finally get the courage to bring the painting to Niceville as he said he wasn’t sure if it would be accepted.

“But once I saw it, I was flabbergasted. It’s incredible, and it captures the beauty of the fountain with the seven dancers at night. We are just thrilled to have it.” 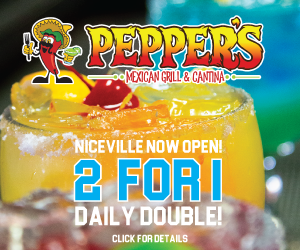 Shires said she plans to hang the new piece in a prominent place within the Mattie Kelly Arts Center where patrons can enjoy it.

Pope is a member of the Mattie Kelly Arts Foundation and the Arts and Design Society of Fort Walton Beach. His paintings are displayed and sold at G & Co. Art Gallery in Destin.