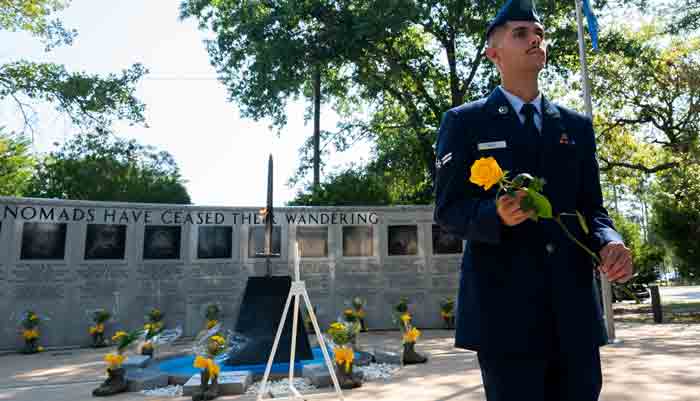 On June 25, 1996, a sewage truck was used as a bomb and detonated near the housing complex where military, coalition partners, and civilians lived.

“We are gathered here today, just as we have for the last 26 years, as Nomads past and present and as survivors and family members, to pay our respects, to honor the sacrifice, to thank God for the survivors, and to remember our 12 Nomads who gave their lives that day in service of a grateful nation,” said Col. Jack Arthaud, 33rd FW commander.

“It is a privilege to be here with you today.”

“This was the bloodiest attack on America, between the Beirut Marine barracks bombing in 1983, and September 11, 2001,” said Arthaud.

“The immediate heroism and steadfast response of our Airmen and coalition partners following the Khobar Towers attack demonstrated the virtuous character of our Nomads and the justice of our purpose.”

A monument of the 33rd FW’s flaming sword emblem was built to commemorate the Airmen lost that day. Every year, a ceremony is held to reflect on the event and to honor those who died.

“We must never forget,” said Arthaud. “Part of our responsibility is to share the story and the background of this heinous terrorist attack and our Airmen’s heroic response.”

The names of the fallen are: