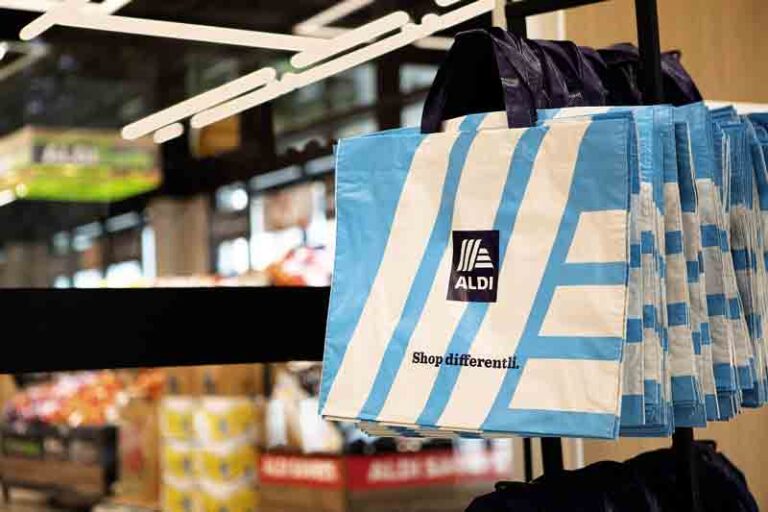 ALDI has removed plastic shopping bags from nearly 500 stores with the goal to phase them out from all of its 2,200 locations by the end of 2023. Pictured are ALDI reusable shopping bags. (ALDI)

NICEVILLE, Fla. – ALDI, which has a new store under construction in Niceville, says it has become the first major U.S retailer to commit to eliminating all plastic shopping bags from its stores.

“We have already removed plastic bags from nearly 500 stores with the goal to phase them out from all 2,200 locations by the end of 2023,” said Jason Hart, CEO, ALDI, in a recent announcement posted on ALDI’s website.

“We are thrilled to make this monumental pledge in support of our planet, which will remove 4,400 tons of plastic from circulation each year.”

ALDI was named the most sustainable grocery store in America in 2021 by Brightly.eco, a seller of sustainable, environmentally-friendly products.

In March 2021, ALDI announced a set of science-based goals to support the planet’s resources and the people who depend on them, Hart said, adding that ALDI has made significant strides towards meeting our goals.

During the past year, ALDI reports it has:

“While it is incredible to look back on what we have accomplished in 12 months, what excites me most is our ability to go even further together to ensure that as our business grows, our environmental footprint doesn’t grow with us,” said Hart.

“We are committed to learning and adapting to be the best corporate citizen we can be while also providing you with the value you expect from ALDI.”

The ALDI in Niceville is at 2030 John Sims Parkway. The store reportedly will be 20,442-square feet. The opening date has not yet been announced.