Geek Lights on the Corner 2015, a popular Niceville Christmas lights display and music show, will be held in Niceville November 30, 2015 through January 3, 2016. The free performances take place at the corner of Bluewater Boulevard and Antiqua Way in Bluewater.

Shows begin on the hour and half hour starting at six p.m. with the last show starting at 9:30 p.m. Sunday-Thursday, and at 10:30 p.m. on Fridays and Saturdays. 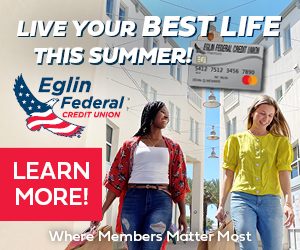 The Geek Lights consists of Christmas lights and other themed display elements, all under computer control and synchronized to stories and music. This year’s display features approximately 85,000 lights, driven by nearly 300 computer controlled circuits. There is an all-new story to open the show, and many fan favorite songs from past seasons will return. Also, there will be new songs and surprises, and new features as the season unfolds.

2015 marks the 8th year for Geek Lights on the Corner.

The Geek Lights on the Corner has announced the selection of H.E.A.R.T. Animal Rescue Inc. as this season’s donation recipient. There will be a cash collection box in the viewing area throughout the season, with 100 percent of the money collected going to support H.E.A.R.T.’s mission.

“We are so excited and blessed to have been chosen to be the charity for this WOOFALOUS event!” said April Madr, President of H.E.A.R.T., “All donations will go directly to rescue and intervention programs to our furry friends who are so desperate for someone to help them.”

The Geek Lights on the Corner are the technical wizardry of Jeff Werner, the “Northwest Florida Geek” and Wendy Werner, his “Spouse Peripheral.” Jeff is author of the weekly computers and technology Q&A feature “It’s Geek to Me,” which appears on Saturdays in the Northwest Florida Daily News, online at ItsGeekToMe.co, and in other newspapers across the country